The Puzzle of Materials 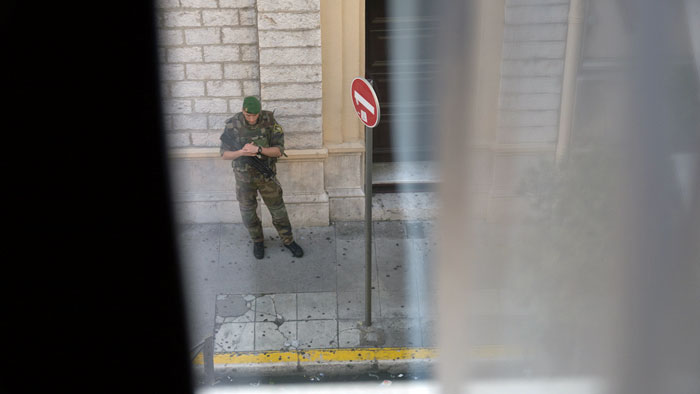 For artist Caterina Verde, an epiphany occurred before an Yves Klein painting. “There was so much energy coming from it that I thought it was going to knock me over,” she recalls of her encounter with Monochrome Blue at the Los Angeles Museum of Contemporary Art. “I thought to myself: This is what art is, when it’s got ultimate energy coming through to you.”

It’s just that kind of energy Verde aims for in her own process. Consider Remote Viewing, a work in progress comprised of hundreds of hours of video footage.  The goal, says Verde, is to combine the segments in a way that generates an effect virtually physical: “What is the emotional impact on your body when you experience these different imagistic states?” 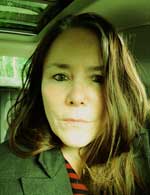 Remote Viewing’s title refers to a special kind of vision, a disengagement from immediate surroundings to sense the presence of distant realities. “I want to take the viewer to different places,” says Verde, meaning not just physical locations but also a range of psychological, physical and emotional states. “And in the process data will be pulled in from all over the world.”

Part of the power of Remote Viewing lies in its manipulation of time. “I like what cinematic motion can do with time,” says Verde. “It can slow you down, enter the world of tedium, bore you, then set you on edge, relax you, and then set you on edge again, or some other state. There’s the linear time of the actual piece and then there’s the volumetric time of what’s happening — expanding in all directions.”

If that sounds a bit like science fiction, it’s no accident. Verde’s art has long focused on accessing other worlds by crossing the aesthetic dynamic with demonstrable truths. The project’s extrasensory ambitions recall the titular term’s original use by the Stanford Research Institute, hired by the Central Intelligence Agency back in the 1960s to develop a program that would employ psychic powers for espionage. The effort involved an attempt to secretly retrieve far-off data, a process for which the term “remote viewing” just seemed more scientific than “mental telepathy.” If the governmental efforts brought mixed results, Verde sees continuing promise in the psychic powers’ artistic potential. She relates the ability to access everything from everywhere to the collective unconscious. “I believe we are all continually dropping into remote viewing.” 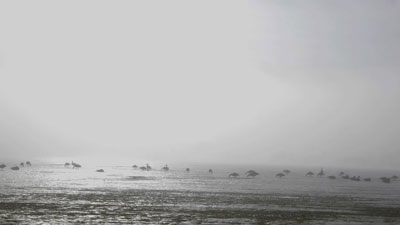 A preview of Remote Viewing in its early stages reveals some of the formal techniques employed to achieve a state of distant communication. Interestingly, Verde makes an explicit reference to her film’s espionage origins by including texts from relevant declassified CIA documents. The roughly eight-minute initial segment contains over a dozen scenes, suggesting how challenging the entire project will be, with locations as various as United States, France, Germany, and a refugee camp in Greece. The scope of Verde’s shooting is broad: “I’ve been filming scenes for over five years now,” Verde says. “So I have a huge inventory of experiences and situations.”

Filming is, of course, only the beginning. Verde’s challenge is to transform scenes noteworthy for singular interest into a project with larger impact. She describes her approach to that task as a kind of aesthetic dance of random experiment and conscious arrangement. “There are times when I’m editing or putting images together and I start playing around,” she says. “I suddenly see how one image can lead naturally to the next, as a perfect response. And then I realize I can change the direction of a scene just by putting in a little clip.” The challenge here is to deal with what Verde describes as “the puzzle of materials” in ways surprising and productive.

This continual experimentation recalls the power of serendipitous discovery that Bruce Nauman (an artist Verde has long admired) once described as “working on something and finding out ‘wow, that’s far out,’ or interesting, and then thinking about it, trying to figure out why it interested you.” This aesthetic dynamic, described by Verde as a “conscious randomness,” differs fundamentally from traditional story boarding. “An artist friend of mine always creates precise parameters for herself,” says Verde. “Then she doesn’t go out of that area. A lot of artists work like that, forcing themselves to be disciplined within the confines of certain rules and regulations. That’s not what I do.” 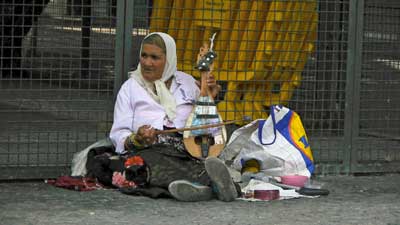 The scenes of Remote Viewing are arranged in a way that builds psychological pressure by creating unfulfilled expectations. This recalls Nauman’s reference to “the tension of giving and taking away. . .of giving two kinds of information that don’t line up.” Verde has a similar take: “I like to take two ideas and kind of bang them together so that it almost is a bit of a brain freeze. Sometimes it doesn’t take you anywhere, but other times it settles in and creates a neuropathway to a new way of thinking.”

That term “brain freeze” is suggestive. The audience confronted with an array of conflicting visual objects succumbs to a kind of mental shock, an unmooring from the chains that restrict consciousness. “The art creates a kind of nullness, and stops you in your tracks,” Verde puts it. That appeal to the power of the artifact recalls Nauman’s own reference to a work of art that creates a “jolt” that “throws you off” because “something happens that you didn’t expect.”

All this suggests an unmooring from normal sensation, and it’s worth noting that Remote Viewing requires people to place their heads in a viewing box to separate them from their surrounding world. What viewers see from their protective enclosure can be as disorienting as a landscape of familiar scenes turned alien by context. Verde describes such an environment in this passage from her artist’s statement:

“I am interested in the subtle change in the identity of objects and situations such as that of an object that takes on another association, i.e., the tree that becomes a wooden soldier, left standing alone in the woods, frozen and active, juxtaposed with a soldier guarding a temple, where the viewer is perhaps the threat. Situations in which motion and action take on a repetition thus becoming their own melodic undertones. A gypsy woman on a European street plays one note over and over again with her cat chained to her side, she carries an image of what seems to be the Virgin of Guadalupe on her instrument while men dressed as super heroes waft by.” 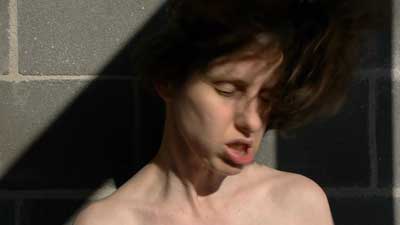 The film’s disorientation can generate an ineffable emotion. “When you’re going through these various places you start to feel a kind of instability,” says Verde. “You start asking ‘Where is this taking me?’ That creates almost a fearful state, in a sense, because you’re waiting to find out where you are going.” If the emotion resists definition, it possesses real power. “It feels like it has volume to it, and it has a real impact.”

Verde points to a dramatic example of emotional power in one of the film’s more unforgettable segments during which performing artist Elke Luyten vigorously shakes her head back and forth for several minutes. “Her head takes on a life of its own, and seems to separate from her body,” says Verde. While the act of shaking makes the dancer appear to have two faces, Janus-like, Verde points to an unexpected event: “What I couldn’t believe is that when you relax your eyes a little, there’s this third face that comes out of it.” The net result for the audience can be unnerving. “Some people are very upset by it, and say, ‘Okay, that’s enough of that, I can’t take it anymore.’”

This powerful scene shows how an emotional thread can supplant traditional story, and how a film can achieve cohesion through what Verde refers to as “a kind of non-narrative narrative.” Yet it’s part of the nature of any nascent work to surprise with maturation, and Verde’s constant state of experimentation may lead to new wrinkles. For example, there is the possibility that story may reappear in this work so prominent with image and emotion. “In past works I have played with the visual cinematic language of narrative while not allowing a real narrative to happen,” she says. “But now I’m finding myself being pulled in by it. And I am thinking I should go ahead and explore that and see what I can do with it. I am planning on the work having scripted scenes and will have sound and sonic contributions by Berlin-based musician Knox Chandler.” 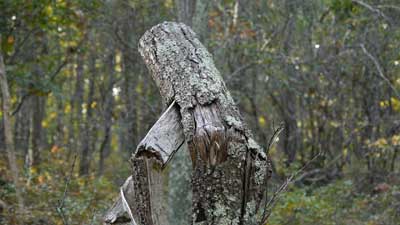 When interviewed early in 2018, Verde was working on the first of eight parts that will eventually make up Remote Viewing. While the dynamics of an art created from an array of clips may seem unusual, Verde likens the form to everyday experience: “It’s kind of like life,” she says. “You’re moving through different states all the time; you’re confronted with someone coming at you down the street; you’re confronted going down the stairs. You’re constantly having to respond all the time to different states.”

If Verde is successful with her work, Remote Viewing will shift the dynamics of the everyday onto the plane of the extraordinary. The result for the audience will be a cognitive impress that resists explication. “It’s like a kind of a truth, an ultimate truth, a mathematical or new truth of nature,” says Verde. “And when somebody encounters it, it’s irrefutable. You can’t dispute it. You can’t go around it or push it one way or the way. It simply is.”

Caterina Verde is an American and French artist.  She began her working process primarily as a painter, later moving into technology which at the time consisted of Amiga computers.  Verde was the Performance and Hybrid curator at The Kitchen in NYC until she returned to France for approximately a decade. She has also curated in other locations and works in a multi-platform of media that includes video.  She now lives and works in New York.

Unattributed statements by Caterina Verde were recorded during interviews with Walter Idlewild in January and February 2018.