The Power of the Pure Idea 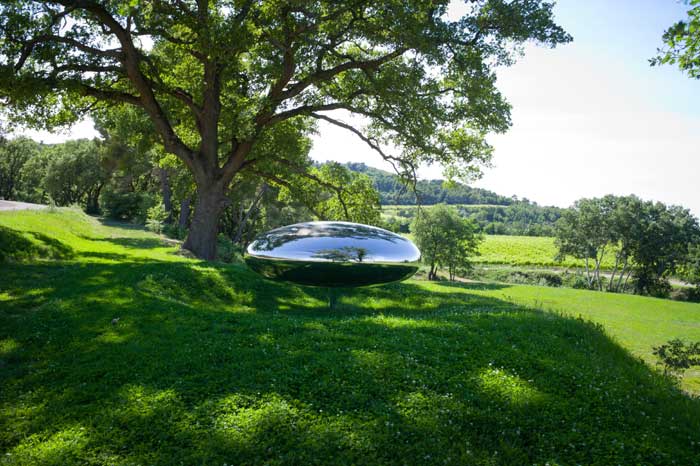 “What’s it about?” A common question from people looking at a work of art, but a bit of a puzzler for the creator of a sculpture, a painting or a novel. One answer is an appeal to the idea that sparked the work, the stimulation for assay that Henry James liked to call his “donnée.” Melville, for example, might describe his famous novel as about a vessel staved by a giant leviathan.

Yet this practical response is but a proxy for a more complex dynamic. Any work is “about,” as well, at a deeper level, what one might call its formal idea, the dance of artist and constructive materials. Here Melville might say his work is about the engagement of the author with language in the pursuit of the human ramifications of a natural fatality.

As thorough as such a statement might be, it can mislead. Consider The Lightning Field, a work by Walter De Maria. Here the artist’s germinal idea was straightforward: Arrange 400 vertical steel poles at an isolated spot of land and give free rein to nature’s force. If one extends this germinal idea into its formal dynamics by saying the work is about the artist installing 400 rods in a lightning-prone field, one has described the work’s internal machinations at the expense of its full suggestive power.

What a work is about is its meaning, the relation of its contained symbols to natural objects. And a rendition of the work’s germinal and formal ideas can only recall vanished incidences of these relations—accidents left behind as the work in the world exerts upon nature the powers of its symbols, creating in the skilled observer a cognitive impress which is about the artist’s workaday ideas to the same degree a symphony is about a nascent leitmotif. The artists’ engagement with words, or with steel and soil, transforms a work into an entity greater than the sum of its parts.

“No photograph, group of photographs or other recorded images can completely represent The Lightning Field.”

“The sum of the facts does not constitute the work or determine its esthetics.” 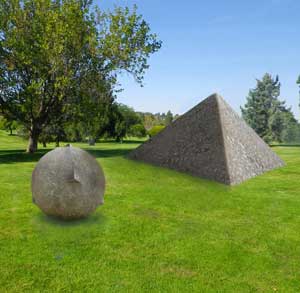 Can we not extend De Maria’s insight to every work of art? The artist’s development of the formal idea, a process determined by the suggestions jumping off the germinal one, launches the work into the world with a meaning contained in, and expressed by, its constructive materials. Hence Leonard Bernstein’s assertion that the meaning of the opening four notes of Beethoven’s Fifth Symphony is contained in all of the notes that follow.

Which thought process brings us to the sculptures and paintings of Tom Shannon, an artist who worked with De Maria in the 1970s, and who admired him—along with Robert Rauschenberg and Michael Heizer– for a certain mental posture, a recognition of the mastery of the founding idea. “These are artists that were really doing powerful work,” says Shannon. “That had an influence on me, that kind of conceptual and experimental thinking, particularly in Walter’s case. He was not married to any material or any particular style—it was more the idea that was the important thing for him.”

And if the artist would follow the creative impulse across any wild sea, there would always be a steady eye on the guiding star. For Shannon, the initial stimulant is often determined by science, a discipline he admires for its irrefutability. “I try to make things that have something you can’t dismiss on aesthetic grounds,” he says. “You scientifically define something, and people concur if the evidence is really there. There’s no opinion that is really required, whereas art is very much about opinion and about individual tastes.”

Shannon characterizes his own germinal ideas as “clear cut,” as “entities that are definable,” phrases that could just as easily define De Maria’s The Lightning Field and Heizer’s Levitated Mass. One might describe these ideas as mental images of natural objects connected by idiosyncratic forces.

If that suggests ideas that take the form of a picture rather than a statement, it will come as no surprise that Shannon habitually sketches his ideas in graphic form rather than in language. All of his sculptures start their lives as illustrations on paper. 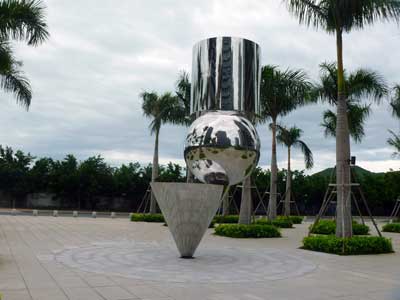 Here is one example. “This was a flying electric house,” says Shannon, pointing to one among the myriad sketches crowding his studio notebooks. “The idea was to use thousands of small helicopters, micro helicopters in a huge array that would give it its lift.”
Such sketches are made quickly, because a germinal idea can be as vaporative as a dream’s memory. “If an idea comes to you, it might be very fleeting,” says Shannon. “To get that same context again in your brain is to redo it, and sometimes that won’t happen. So you have to get it down right away.”

The initial concept, though, may not be the final one. Shannon allows his ideas to simmer and will continually create new sketches in a tuning process not unlike that of a writer’s repetitive edits: “I draw something, and I think about it, and I say, ‘oh, yeah, I could do this in response to the first drawing.’ Then I draw another thing on the page. Then it’s ‘oh, that could do this.’ Then I do that. It’s a kind of an iterative process, back and forth between having an idea, drawing it, looking at it, and getting an idea from that drawing. My thinking is really tied to that.”

The visual determination extends not only to the originating sketch but also to the finished work, a sculpture which Shannon thinks of as a memorialization of his idea. “I always thought if you have an idea and it’s visual, that should be a visual concept.” He is not so drawn to the approach of many conceptual artists of the 1960s and 1970s, who mounted typed concepts on the wall. “To embody an idea in an object that is well made is more satisfying. And you want to provide a satisfying experience for people.” 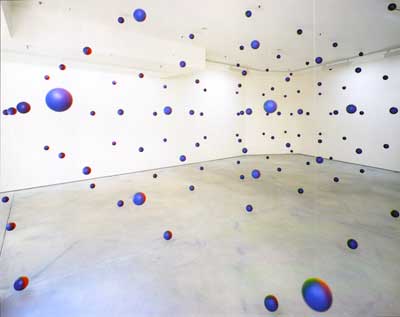 Just as De Maria maintained that “the land is not the setting for the work but a part of the work” so is nature an integral part of Shannon’s works, a direct result of the artist’s appreciation for science. Consider, for example, his pendulum paintings, made by allowing a large pendulum with remote control paint guns to swing back and forth over a canvas.
“The idea of the pendulum paintings was to use natural forces,” he says. “It’s just surprising how nature wants to express itself. When you think of it philosophically, we are nature obviously. We are part of nature. As such, it’s a spokesperson or emissary.” Nature alone, in Shannon’s view, can be a powerful force in a sculpture or painting, one that lacks any dependence on the human. “When you’re looking in a museum, often times it’s the painting landscapes that don’t have people in them that are the strongest.”

If Shannon sees nature as a creative force in his work, the artist, in his view, acts as a kind of “master of ceremonies” for the proceedings. This relationship is apparent in the artist’s aerial paintings, a series of works which consist of dots arranged in a way which, when engaged with the viewer, create floating, three dimensional effects. The dynamic here is a consolidated one: Artist, nature, constructive materials and viewer work as one:

“The aerial paintings are all based on this thing I discovered: I could paint things that would float in the air. I’ve been into stereo my whole life, been really interested in 3D movies and made 3D drawings and things when I was young. When I succeeded in making these larger scale optical things, I got very excited about it and thought that this could be an important contribution to the realm of painting. The work illustrates the fact that the universe really exists in our mind. We construct reality through our minds. What we have really determines what we see. These paintings, the 3D effect with them is a result of a mental construction. It’s not really 3D, but your mind makes it that way. I like that fact, that it illustrates clearly that things are products of our minds, connected to our perception.” 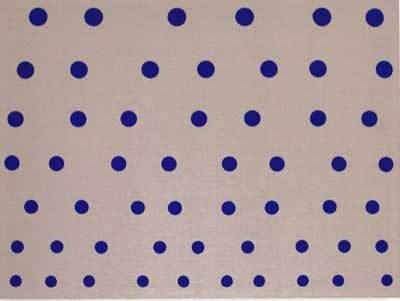 The aerial paintings suggest how the very act of engineering the formative idea transforms a work. And so it is in all of the arts: The very act of making Persona, insisted Ingmar Bergman to an interviewer, transformed his film into something alien from his initial idea:

“Look, don’t make me state what my initial thoughts were, because that’s of such little importance. Of course, we have a working theory as you always do when you do something. But it would be utterly stupid to then superimpose that on other people’s perceptions. Each person should experience it the way they feel. And that’s very important for me, the idea that you can never understand a film like this. It isn’t even about understanding. It’s always about experiencing it emotionally. It’s like with music. Stravinsky once said, and I think this is wonderful, ‘I’ve never understood a single piece of music in my life. I’ve only experienced it.'”

The literary critic Norman Freidman once made an assertion which is fitting here: “Something happens to content when it is formed which makes it different from what it was before.” The artist’s ideas of origination, in Friedman’s view, do not simply get reproduced in terms of their surface appearance. The finished work represents not just the germinal idea but the transformative act itself.

And this is the way, I think, to understand the meaning of the sculpture Shannon produces. The work is about neither the artist’s germinal idea nor its formal expansion, but the peculiar interplay of a creation’s contained symbols, the world, and the human observer, what De Maria referred to as “the primary experience” of audience and the artist’s “pure idea.” And what is the nature of the pure idea? Perhaps it can be suggested by the words Robert Rauschenberg used to describe toys he once saw washed up on a beach, artifacts that in his view were “so distorted you can think about them. They’re like an idea; but no specific idea.”

Tom Shannon’s sculptures have been included in international exhibitions at the Centre Pompidou, the Stedelijk Museum, Moderna Museet, the Venice Biennale, the Sao Paulo Biennial, the Biennale de Lyon, the Musee d’Art Moderne de la Ville de Paris, Art Tower Mito and the Whitney Museum. He was a featured artist at the 2003 TED Conference where he presented Air Genie, a spherical helium airship whose entire surface is a LED video screen. He presented a series of paintings made by a remote-controlled pendulum in another TED talk in 2009.

Unattributed statements by Tom Shannon were recorded during an interview with Walter Idlewild in June 2018.