The Persistence of the Real

Does a work of art have a cognitive element? Many will respond with a resounding “yes,” equating aesthetic value and the skilled infusion of constructive materials with an intellectual principle. The alternative is a mindless pattern of craft, a jingle in lieu of a symphony, a gymnast’s split in place of a dancer’s arabesque.

The most careful of observers, though, can fall short when describing the nature of the mental imperative. Can we identify its presence, for example, in the oil paintings of György Madarász? Here a riot of color and shape at once recalls the elusive idealism of abstract expressionism. A closer look, though, often reveals the remnants of a recognizable image that suggests how the artist’s mental activity manifests in a completed work. 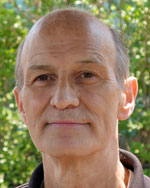 Madarász begins each oil painting by imposing upon a natural object an act of intense concentration. “I envy artists who can start from nothing and put together something new,” he says. “But even if my finished work is very close to abstraction, I find I need to start with some real object.” This position recalls that of Picasso and Matisse, two artists who bucked the growing hegemony of pure abstraction a century ago by insisting on an engagement with some manifestation of the real world, if not as recognizable shape in the finished work then as foundational inspiration. Here is Picasso weighing in:

“There is no abstract art. You must always start with something. Afterwards you can remove all traces of reality. There’s no danger then, anyway, because the idea of the object will have left an indelible mark.”

Madarász traces his own propensity for reality to the 1960s when he was earning his BFA at The University of Fine Arts in Budapest. “We had a very traditional and conservative education, in terms of doing figurative work after a model,” he says. “We always had some object to work with.” The school discouraged experimentation, keeping students uninformed of artistic developments elsewhere in the world. The artist emigrated from Hungary in 1980, thanks to the availability of exit visas when the United States granted that country most-favored-nation status a couple of years earlier. After stints in Paris (too dull), Berlin (too history-burdened), and Amsterdam (too small) he moved to Toronto. As for that city, it was just too clean and, in Madarász’s view, too littered with the petit-bourgeois. The right surroundings are important to those artists who form private and professional lives from environmental materials as eagerly as they employ oils to create paintings. It so happens that Toronto artists at the time were looking to New York, and in 1984 Madarász moved to that city’s East Village, a neighborhood with lower rents than the nearby, and gentrifying, Soho. When asked what he liked most about his newly adopted city he has a one-word answer: “Dirt.” Money, on the other hand, was tight for an artist who arrived with nothing but a gym bag on his shoulder. “I had to work myself up to the point of getting studio space,” he says. “And that was hard.” He landed carpentry jobs to earn his keep and went back to school to learn marketable computer skills. Through it all, though, he found his creativity fed by a community of artists. “It seemed that on every corner there was a gallery.” 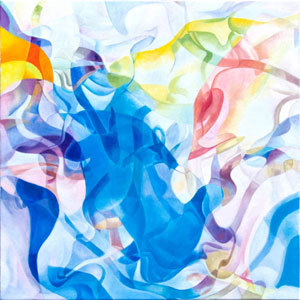 By the 1990s Madarász had secured a studio in New York’s meat packing district. Today’s trendy neighborhood was at the time a rusted relic of the city’s industrial past, as rugged and dirty as its iconic elevated rail track. Madarász immersed himself in the industrial milieu, mining the area’s raw grit for aesthetic ideas. “I would watch the meat delivery trucks coming and going, unloading their carcasses and pushing them into freezers,” he recalls. “Then the truckers would discard the damaged wooden pallets, and of course they didn’t care how they handled them, so they ended up in random patterns.” It was just those patterns that Madarász found useful. “The arrangement of the pallets seemed to suggest an imprint of the process of moving the meat,” he recalls. “It was like taking a mold of something that was three dimensional. It was almost like a language in a way, a visual language.” Madarász began to paint images of the pallets, their random patterns providing the inspiration for a transition to abstraction that has only become more pronounced over the years.

If Madarász has left the meat packing district behind, he retained a valuable lesson from his life in that neighborhood: Randomization helps an artist grow. Today he achieves the haphazardness once provided by discarded pallets from his own computer program that subjects visual images to arbitrary distortions. “The program can run hundreds of times while generating images with different shapes and colors,” he says. “The outcome is always uncertain and continually surprises me.” Every iteration suggests new painterly paths. Madarász finds the program’s third-party nature especially valuable. “I realized that to come up with something that moves me beyond my personal boundaries I needed help, and my help is my computer. The machine is not me. It is something else that pulls me out of the present and allows me to peer into something new. My favorite quote on this topic is from Marcel Duchamp: ‘I want to be free, and I even want to be free of myself.’ Sometimes you get so comfortable in your thinking that you keep repeating yourself. You don’t do anything new, you don’t push yourself. And in art you always have to push yourself, because if you stay where you are you start using clichés.” He likens his computer work with the pioneering band Kraftwerk’s use of electronic music in the 1970s to help create futuristic visions. “Maybe my early interest in that band is what inspired me to use technology in the first place.” 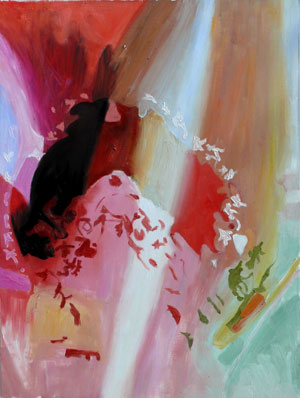 Madarász begins each painting with a foundational object in the form of a two-dimensional image. Recent examples include the “Deer Crossing” signs so familiar to drivers, the directional signs that dot airport access roads, and even logos of corporations such as GE, GM, Shell, Paramount, and Ford. Not just any image will do. “It’s important for me to connect with the image somehow, to the history behind it,” says Madarász. Take, for example, the typical sign for a public toilet, which can be thematically suggestive with its figures of a woman and a man divided by a bar. A corporate logo can pack a lot of meaningful baggage too: perhaps a history of engagement with the community or a corporate hierarchical system against which the artist instinctively rebels. Conversely, Madarász rejects candidates freighted with too many artistic references that might clog the creative pipeline. Examples are the skulls of Picasso and the apples of Cezanne. “A road sign has nothing like that, so it is easier to handle.”

Whatever the creative seed, it must be simple enough for the computer program to handle without choking. Indeed, prior to subjecting his foundational image to randomization Madarász often simplifies it further. “I like to get rid of any unnecessary elements, any non-essential external references,” he says. This drive toward purity is yet another inheritance from his days reducing wooden pallets to their essential forms. In conjunction with this simplification Madarász starts to ponder changes. “I look at the object and say, ‘this is not its right shape.’ I feel I must change it in necessary ways. I have to give it a new form.”

The next step is a dance of man and machine. After running his image through the computer program Madarász displays the resulting abstraction against a grid on an iPad, a device which allows him to zoom in on details. He then paints on a canvas overlaid with a similar grid serving as guide. “I give myself freedom to paint, to use gestures which are my reaction to the visual idea on the screen,” he says. “I love the contradiction of taking something from a mechanical computer and making it more emotional, more personal. If the work is successful it will contain a resulting tension, a paradox even.” 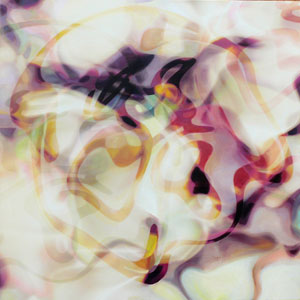 The guiding principle for each work, the force that harnesses the wild abandon of the random, arises from Madarász’s engagement with the foundational image. And that is what gives his work a cognitive element, the condition that separates art from a machine’s random pattern. “If I am engaging in right thinking my concept is really focused with nothing added from the outside,” he says. “It almost becomes a minimalist thing in itself.” This intensification is in sharp contrast with many beginning artists, he says, who think superficially. “I usually hate to go to art fairs because you see what I call ‘modern kitsch.’ They use elements they have seen well-known painters use, but just put together with nothing behind it.”

Paradoxically, the surface details which initially attracted Madarász to his seminal image usually largely disappear by the time he has completed his reformation. “At the end of my work there’s usually no trace of the sign’s history,” he says. “Or at least very little.” In its place is something more valuable. “The signs that I begin with possess no intentional aesthetic value. I add my own aesthetics to them.”

If Madarász’s use of randomness seems idiosyncratic, the artist maintains that it is but the latest iteration of a long tradition. “Artists have always relied on randomness,” he says. “When you work with a brush you create randomness and you don’t know how exactly it’s going to turn out. The abstract expressionists always relied on a kind of Zen state where they just splashed on colors and then saw what happened. Sometimes something good, sometimes something outrageously bad.” In more immediate times, Madarász’s work can be viewed partly as an aesthetic response to “The Rouen Cathedral Suite” by Roy Lichtenstein, a painter whom Madarász especially admires. Lichtenstein transformed Claude Monet’s paintings of the titular cathedral, breaking up their images into exaggerated Ben-day dots. Although Lichtenstein painted his works by hand, the machine-like appearance of the resulting images provided the very mechanistic dynamic that, in Madarász’s view, helped Lichtenstein move into new artistic territory. The cost for this transition, though, seemed to be a loss of human presence. “I asked myself, ‘where is the personality here?’” says Madarász. He attempted to address that void by adding his human interpretation to the machine-generated abstraction. 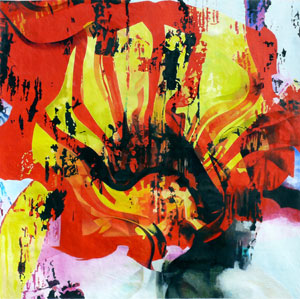 Madarász’s work process is strikingly similar to a recent formal experiment conducted by the Martha Graham Dance Company in conjunction with Google technologists. A dancer wearing a virtual reality headset improvised movements while engaging with random images. The result was a loosening of the chains of self-consciousness and an elevation to a higher level of creative freedom. Was the dancer’s dynamic so different from that of Madarász? Both artists responded to random stimulants that moved the creative act beyond established comfort zones, resulting in sensorial shifts that transformed by means of artistic gestures the constructive material at hand, be it oil paint on canvas or human body on stage. The result in both cases is a cognitive impress, a child of an intellectual principle that combines the working hypothesis of the artist with that individual’s response to random stimulants, expressed in terms of abstract forms that suggest intellectual paths beyond the edge of the canvas. Interpretive observers are treated to a glimpse, if hardly a clear view, of a cognitive element that—once active upon the stage—invites irresolute transformation.

György Madarász has exhibited his work at over two dozen galleries in his adopted city of New York and his native Hungary. His oil paintings were recently featured at Sideshow Gallery, Bleecker Street Gallery, The Fashion Institute of Technology, The Harlem School of the Arts, and The Tate Chelsea Gallery. A recipient of the Adolph Gottlieb Foundation Award, Madarász was artist-in-residence at Saint Michael College, Colchester, Vermont.

Unattributed statements by György Madarász were recorded during interviews with Walter Idlewild in June and July 2018.